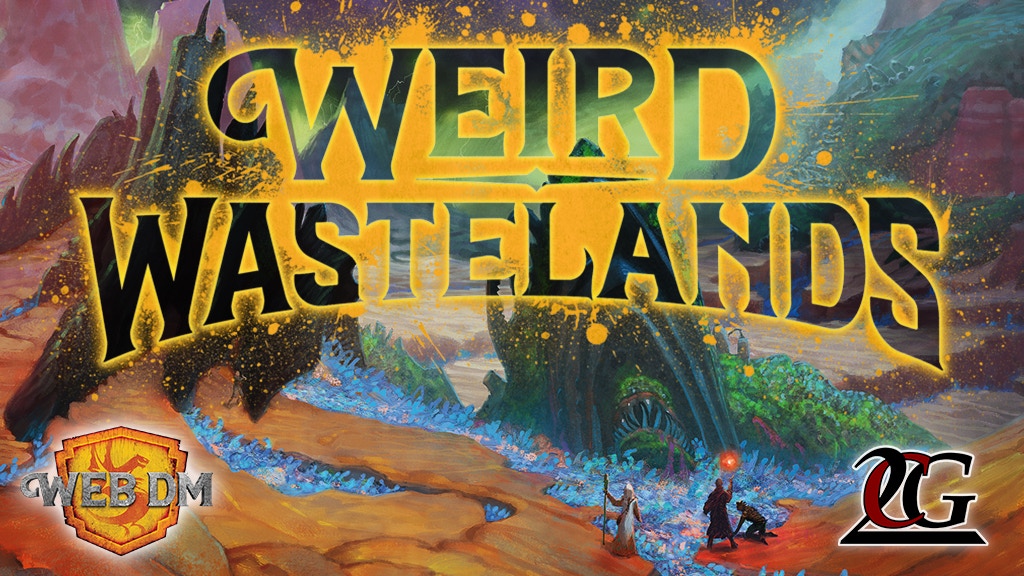 A supplement for 5e D&D that gives you everything you need to play great games in places adversely affected by magical forces.

Latest Updates from Our Project:

Every day we’re turning in and editing more and more content, both fantastic images and evocative words. The setting and mechanics are really coming together in a way that will highlight post-apocalyptic play in 5e. One of the ways we’re detailing the Weird Wastelands setting is by having several factions that your characters can interact with. Factions are something we’ve talked about on the WebDM channel and our Patreon (see the end of this post for resources).

One of the factions in Weird Wastelands is the Arcanotech Cabal. The world may have been turned to a wasteland, but the Arcanotech Cabal strives to use the magic that destroyed society to create a new and better life for...well...at least for themselves!! Today we’re shining a spotlight on this weird and nuanced faction:

Motto: “Our mastery of arcanotech will surpass the glories of the past.”

The Arcanotech Cabal is a group of loosely allied technomancers, artifice-wizards, and alchemists dispersed into small collectives that prize their autonomy even as they pursue the shared goal of rebuilding civilization. Distant memories of the apocalyptic magical wars of the past cause the Cabal’s members to keep their identities secret and communicate with each other sparingly through proxies. If they ever fully unified, they would outnumber every other wasteland faction, but the Cabal’s internal divisions pose a serious hurdle to unification and their efforts to rebuild.

Members of the Cabal devote themselves to uncovering the arcane mysteries of the pre-apocalypse and using those resources to build a new civilization. They are secretive and guard their knowledge closely, even from other members. When travelling the wastelands, they pose as pilgrims or salvagers, so as not to draw unwanted attention to their activities.

The Arcanotech Cabal occasionally seek alliance with the Fellowship, especially when their goals are aligned. They also work with the Enduring Aristocracy, mainly because the undead nobles give the Cabal access to arcanotech resources. The Cabal is enemies with the Blood Harpy Legion because the Legion sees their use of arcanotech as too dangerous, and the Infernal Recruiters because the Cabal opposes their looting of wasteland treasures and enslavement of souls.

They can access nearly any non-legendary magic item given enough time and materials. Magic items created by the Cabal are arcanotech devices .

Technomancers and Arcanotech magi carry multiple arcanotech devices and at a minimum will have bracers of defense and a wand or staff to defend themselves with when encountered. Some non-spellcasting members of the Cabal wield magic weapons or drink the various potions provided to them by Cabal alchemists.

Cabal members tend to be living humanoid spellcasters, but there are some undead members who keep their unliving nature hidden. A fair number of members are not spellcasters and serve as the main field agents and informants of the Cabal’s spellcasters. The Cabal maintains large numbers of constructs which they primarily use to guard their hidden fortress-workshops.

Here are some notable members of the Arcanotech Cabal.

• Gorasto (NE): A cunning half-orc arcanotech magus, Gorasto is the most influential leader in the Cabal and made the recovery of lost arcanotech wonders of the Last City of MAN  popular with many other members. He maintains a network of loyal spies and informants unaffiliated with the Cabal and is accompanied by a retinue of demon-bound constructs and ambitious apprentices. Gorasto’s influence is the driving force behind the Cabal’s tendency towards division and secrecy as his many former students seek his approval at the expense of their peers.

• Lagren Tung (CN): Lagren is an unorthodox technomancer of unknown ancestry who leads a retinue of similarly independent-minded cabalists. They are at the center of a rapidly growing movement within the Cabal to oppose Gorasto’s secretive methods and use of bound demons. Lagren claims descent from the Cabal’s legendary founder, Barbarsus, Master of the Polyptych Schema and has many agents scouring the wasteland for their ancestor’s lost spellbook.

• Techanicus Supportus (LG): Techanicus is a priest and technomancer who leads a group of devoted followers on a holy mission of peace in the trenches of the Colossus of Rust.  He claims to have received instructions from an ineffable clockwork god to bring peace to the warring constructs and incorporate the territory into the Republic of Autons & Man. Techanicus also claims that this mysterious god gave him the orb of peace, an arcanotech device capable of influencing constructs.

The Arcanotech Cabal Creatures table presents a few creatures likely to work for or with the faction.

The majority of Arcanotech Cabal spellcasters practice technomancy, as described in the technomancy arcane tradition in chapter 1. Technomancers are the most common caster type in the Arcanotech Cabal. They use custom-crafted arcanotech devices to cast their spells and are almost always encountered alongside small constructs of their own creation.


A technomancer who has mastered technomancy is known as an arcanotech magus, a title for which the true meaning has long since been lost but remains an honor.  Most arcanotech magi are reclusive, but some use their knowledge and influence to gather a large following of apprentices.

At the GM’s discretion, NPC technomancers and arcanotech magi may use the class features of the Technomancy arcane tradition.

Arcanotech magi and technomancers have their own sets of prepared spells which you can use instead of the default spells. Spells marked with * can be found in the spells section of chapter 1.

At will – magic missile, mirror image

Jim Talks about the Arcanotech Cabal in the WebDM episode on Creating and Running Factions: https://www.youtube.com/watch?v=9-f1qxCuv4A

The next Kickstarter update will be July 6th or earlier.

Schedule Correction. We’re still moving toward a community PDF delivery in August; and the final PDF delivery is scheduled for October with physical deliveries starting in March of ’23.

We appreciate your patience and continued support!

With the air clear we can see Words and Art are pouring in!

We had to weather some storms (aka delays) at the beginning of the year, but things are clearing up, so thank you for your patience. Below we have a couple of new images to share and some content drafts we think will hold you over like a cool drink of water after traveling the wastes.

Here’s the final on the Alt Cover art and mockup of the Alt-Deluxe Cover for your pleasure.

Reminder that if you want to upgrade or adjust your pledge to include the Deluxe-Alt cover, please let us know in the form here: https://forms.gle/MNL7eAauQ5SCjzpZ9

Beware the dunes hold dangers that can surprise even a seasoned adventuring party and can swallow them whole if they’re caught unprepared!

The quest deck is an add-on or part of the collectors box, here’s a sample of the quests. You can still add it via Backerkit if these pique your sense of adventure. (Note that these are unedited).

Hook: The devil commanders of the Recruiters want to formalize diplomatic relations with the court of the Eternal Sovereign. They require locals familiar with the territory to guide an infernal envoy and her entourage through the wastes to Enduring Aristocracy territory.

Hook: A mummified priest yearns for absolution in oblivion and seeks out someone capable of breaking the necromantic oaths to the Eternal Sovereign that prevent its permanent destruction.

Complications: The Eternal Sovereign turns his attention to the party and waits for them to drop their guard before striking back.

The next Kickstarter update will be Saturday, June 4th or earlier.


Schedule Adjustment. We’re now moving toward a community PDF delivery in August; in addition the final PDF delivery is now scheduled for August. Apologies for the delays and thank you all for your patience.

We appreciate your patience and continued support!

WASTELANDERS - IT'S TIME FOR ART!

Oh, do we have a show with art today! There has been so much progress here, it's astonishing. Let's get right into some tremendous updates - right at the top: the UPDATED DELUXE COVER ART

If you (like everyone on the 2CG team) want to update your orders for the Deluxe Alternate covers of the Weird Wastelands project, please let us know through the form here. Include your name, Kickstarter email, and any notes you want to share and we'll ensure your order is updated before it all ships.

Amongst the wastelands are heaping piles of art for the Weird Wastelands project! Let us know in the comments below if there are any you'd like to see up-close and in high-detail and we're sure we can make that happen (though it might take some scrounging!).


With all this great art progress, let's talk a bit about schedules:

The next Kickstarter update will be Sunday, April 24, or earlier.


Schedule Adjustment. We're going back and forth on some of the final changes for the manuscript, which will adjust its schedule slightly from the last update. We're currently planning for a community PDF delivery (fully formatted, copy edited, and in your hands for our final review) in June, 2022.

We did want to apologize for delays. There has been a lot of upheaval in the WebDM and 2CGaming teams through the development of this project, and we're sorry that's impacted the delivery on Weird Wastelands thus far. COVID cases and medical emergencies, moving and company structures - All of these have certainly contributed to delays on this project. We're nearly finished and really looking forward to getting Weird Wastelands in your hands!

The latest update from the development of the weird, wondrous, and terrifying world of Weird Wastelands! Much of the work thusfar has been in writing and development, which is very nearly complete! We're expecting to finish up the manuscript by end of February (a light delay), while we push full steam ahead on the artwork.

The next Kickstarter update will be Sunday, February 27, or earlier.

Schedule Adjustment. With the manuscript slightly behind schedule, the full PDF schedule will shift slightly as well - we're looking at a new target deliver date for the PDF of April (rather than March). We're expecting significant updates on art for this project (and we'll showcase the latest project tracker in the next update).

Welcome to December, and the latest update from the Weird Wastelands Kickstarter! Let's get right into it - this update is going to be brief, as most of the work is happening in the background.


Writing. The WebDM team is crafting everything about the apocalyptic magic that stirs within the wastes, and they're making some great progress. We're looking at "Manuscript Complete" by the end of January. For right now, this means we're on track for that March, 2022 delivery of the first full PDF!


Art. Ooo it's a pretty book. There's a lot of art direction that needs drafting yet, though. The WebDM and 2CG teams have put together 77 of the ~100 art direction drafts for our small army of artists on this project, but we don't have anything to share just yet. We'll start shipping caravans of art to you as soon as we start getting it!

The next Kickstarter update will be Sunday, January 16, or earlier.

We're hoping to have some great art to share in the next update, and should be nearly finished with the writing of Weird Wastelands - again, wonderful work from the WebDM team on the truly massive amount of writing needed for an RPG setting book.